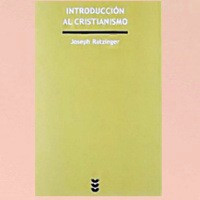 What is Christianity? Answering this question is the fundamental objective of this book. To do this, nothing better to focus on one of the basic texts, the Creed, which the Christian community has synthesized his faith and through which the proclamation recites each time. Being a text that was set at the dawn of Christianity, it is necessary, first, understand what it meant and what was the context and background where born.

But on the other hand, being alive expression of faith, must be subjected to a constant reinterpretation, so that their formulas are intelligible to believers of every historical moment. The balance between fidelity to something received within the Church and updating your content is a requirement that applies not only to theology but to the faith life of every believer. Cardinal Ratzinger has responded to this challenge, paying special attention to the problems that modern culture has brought to faith. This new edition of "Introduction to Christianity" contains the preface that the author wrote in 2000. Being a classic, and is enriched by the contribution of nearly thirty new pages.

He was appointed Archbishop of Munich and Freising in 1977 and promoted to cardinal the same year; for many years he was prefect of the Congregation for the Doctrine of the Faith and President of the Pontifical Biblical Commission and the International Theological Commission. Among his works published by Ediciones Sígueme noteworthy: A new song to the Lord, 1999; Introduction to Christianity, 2001; The fellowship of Christians, 2004; and Faith, Truth and Tolerance, 2005.

On April 19, 2005 he was elected pope, taking the name Benedict XVI. Today is Papa Emeritus.