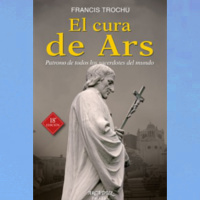 Vianney was born on 8 May 1786, in the French town of Dardilly (near Lyon), and was baptized the same day. His parents, Matthieu Vianney and Marie Beluze,had six children, of whom John was the fourth. The Vianneys were devout Catholics, who helped the poor and gave hospitality to St. Benedict Joseph Labre, the patron saint of tramps, who passed through Dardilly on his pilgrimage to Rome.

By 1790, the anticlerical terreur-phase of the French Revolution forced many loyal priests to hide from the government in order to carry out the sacraments in their parish. In order to attend Mass, even though it was illegal, the Vianneys travelled to distant farms where they could pray in secret. Since the priests risked their lives day by day, Vianney began to look upon priests as heroes. His First Communion lessons were carried out in a public home by three priests. He made his first communion at the age of 13. During the Mass, the windows were covered so that the light of the candles could not be seen from the outside. The secrecy of his Catholic practices continued, especially during his preparation for confirmation. The Catholic Church was re-established in France in 1802 by Napoleon Bonaparte, resulting in religious peace throughout the country, culminating in a Concordate. By this time, Vianney was concerned about his future vocation and longed for an education.

He was 20 when his father allowed him to leave the farm to be taught at a "presbytery-school" in the neighbouring village of Écully, conducted by the Abbé Balley.[3] The school taught arithmetic, history, geography and Latin. Vianney struggled with school, especially with Latin, since his past education had been interrupted by the French Revolution. Only because of Vianney's deepest desire to be a priest—and Balley's patience—did he persevere. Vianney's studies were interrupted in 1809 when he was drafted into Napoleon's armies.[3] He would have been exempt, as an ecclesiastical student, but Napoleon had withdrawn the exemption in certain dioceses because of his need for soldiers in his fight against Spain.[5] Two days after he had to report at Lyons, he became ill and was hospitalized, during which time his draft left without him. Once released from the hospital, on 5 January, he was sent to Roanne for another draft.

He went into a church to pray, and fell behind the group. He met a young man who volunteered to guide him back to his group, but instead led him deep into the mountains of Le Forez, to the village of Les Noes, where deserters had gathered. Vianney lived there for fourteen months, hidden in the byre attached to a farmhouse, and under the care of Claudine Fayot, a widow with four children. He assumed the name Jerome Vincent, and under that name he opened a school for village children.

Since the harsh weather isolated the town during the winter, the deserters were safe from gendarmes. However, after the snow melted, gendarmes came to the town constantly, searching for deserters. During these searches, Vianney hid inside stacks of fermenting hay in Fayot's barn. An imperial decree proclaimed in March 1810 granted amnesty to all deserters,[6] which enabled Vianney to go back legally to Ecully, where he resumed his studies. He was tonsured in 1811, and in 1812 he went to the minor seminary at Verrières-en-Forez. In autumn of 1813, he was sent to major seminary at Lyons.

Considered too slow, he was returned to Abbe Balley. However, Balley persuaded the Vicar general that Vianney's piety was great enough to compensate for his ignorance, and the seminarian received minor orders and the subdiaconate on 2 July 1814, was ordained a deacon in June 1815, and was ordained priest on 12 August 1815 in the Couvent des Minimes de Grenoble. He said his first Mass the next day,[6] and was appointed assistant to Balley in Écully.

In 1818, shortly after the death of Balley, Jean-Marie Vianney was appointed parish priest of the parish of Ars, a town of 230 inhabitants. When Vianney’s bishop first assigned him to Ars, he got lost trying to find the town. Two young men tending flocks in the fields pointed him in the right direction. With Catherine Lassagne and Benedicta Lardet, he established La Providence, a home for girls. As parish priest, Vianney realized that the Revolution's aftermath had resulted in religious ignorance and indifference, due to the devastation wrought on the Catholic Church in France. At the time, Sundays in rural areas were spent working in the fields, or dancing and drinking in taverns. Vianney spent time in the confessional and gave homilies against blasphemy and dancing.  If his parishioners did not give up dancing, he refused them absolution. Abbe Balley had been Vianney's greatest inspiration, since he was a priest who remained loyal to his faith, despite the Revolution. Vianney felt compelled to fulfill the duties of a curé, just as did Balley, even when it was illegal.