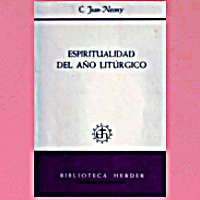 
Jean-Claude Nesmy is the pseudonym of Claude Surchamp, a monk of the Benedictine Abbey of St. Mary of Pierre-qui-Vire. Son of Henry Surchamp, nicknamed Jean Nesmy, and Joseph's brother, took the name of "Angelico" to enter religion.

Dom Claude Jean-Nesmy, was born on June 13, 1920 in Troyes. He entered the Abbey of St. Mary of Pierre-qui-Vire on September 7, 1938, and solemnly professed on October 17, 1939. He was ordained priest on March 4, 1944. He was professor of literature at the College of Santa Maria Pierre qui-Vire, and participated in the beginning of the magazine "Témoignages. Cahiers de la Pierre-qui-Vire "under the pseudonym of his father Henry Surchamp" Jean Nesmy. "

Soon assume sole management of the magazine "Témoignanes" from 1954 to 1988. He is the author of books on liturgy and spirituality, and contributed articles in newspapers and magazines and conferences both in France and abroad. In 1958 he directed "Les Points cardinals" the editorial Zodiac. Collection

From 1983, he helped Mrs. Boulay in founding "Naim" a work intended to help the homeless. Dom Claude died on January 1, 1994 exhausted and deeply concerned about the crisis of faith that followed the May 1968.

One of the most serious schisms suffering Church in a matter of six hundred years, is the practice established separation between theology and spiritual life. Knowledge of the faithful about the supernatural reality and its mysteries, which were to form the very atmosphere of his life, too often minimized in poor formulas learned and assimilated worse.

Meanwhile, godliness, disconnected from their dogmatic sources could not help evolve towards that easy sentimentality, garrulous, softy and dated, whose formulas shock us both now. It is no exaggeration to think that the liturgy, properly understood, can be the meeting point of dogma and contemporary spirituality. There are none of the tenets of our faith that is not implicitly or explicitly professed see along our liturgy.

A must to know and love the liturgical mystery play.