Review: The Mysteries of Christianity 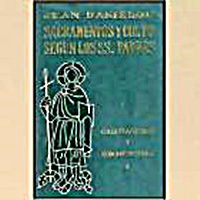 Jean Daniélou S.J. (1905–1974) was a theologian, historian, cardinal and a member of the Académie Française. Jean-Guenolé-Marie Daniélou was born at Neuilly-sur-Seine, son of Charles and Madeleine (née Clamorgan). His father was an anticlerical politician, several times minister, and his mother an educator and founder of institutions for women's education. His brother Alain (1907–1964) was a noted Indologist.

Daniélou studied at the Sorbonne, and passed his agrégation in Grammar in 1927. He joined the Society of Jesus (Jesuits) in 1929, becoming an educator, initially at a boys' school in Poitiers. He subsequently studied theology at Fourvière in Lyon under Henri de Lubac, who introduced him to patristics, the study of the Fathers of the Church. He was ordained in 1938. During World War II, he served with the Armée de l'Air (Air Force) in 1939–1940.

He was demobilised and returned to civilian life. He received his doctorate in theology in 1942 and was appointed chaplain to the ENSJF, the female section of the École Normale Supérieure, at Sèvres. It was at this time that he began his own writings on patristics. He was one of the founders of the Sources Chrétiennes collection. In 1944 he was made Professor of Early Christian History at the Institut Catholique de Paris, and later became dean. Beginning in the 1950s, he produced several historical studies, including The Bible and the Liturgy,

The Lord of History, and From Shadows to Reality, that provided a major impetus to the development of Covenantal Theology. At the request of Pope John XXIII, he served as an expert to the Second Vatican Council, and in 1969 was consecrated as a bishop and made a cardinal by Pope Paul VI. He was elected to the Académie Française on 9 November 1972, to succeed Cardinal Eugène-Gabriel-Gervais-Laurent Tisserant. His unexpected death in 1974, in the home of a prostitute, was very diversely interpreted. He died on the stairs of a brothel that he was visiting. It turned out he was bringing her money to pay for the bail of her lover. Thanks to a group including Henri Marrou, his reputation was cleared.