Space and time in Christian philosophy 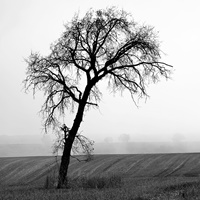 The historical interpretation by Christian philosophers was progressive and linear. It can be said that St. Augustine founded the theology of history, or at least leaded this reflection beyond the usual limits reached until then.

In 410A.D. Alaric invaded Rome with his Goth army; such event was absolutely significant and outstanding. St. Augustine began to write The City of God in 412A.D., finishing it fifteen years later.

He presents Christian theology of history in the second part of this work. He didn’t talk about historical realities, but meta-historical. Two loves created two cities; the terrestrial city was built by the love for oneself and the oblivion of God, while the celestial city was created by the love for God and the oblivion of oneself. These two cities are not identified with the Church or the state.

Understanding them as the two swords of the medieval order would be anachronistic. The time itself is judged from eternity. St Augustine tells us about an original time previous to sin, a time of falling and redemption. We only have two options: evading Christ, destroying ourselves, or accepting Him and exist. This is the ambivalence of the augustinian conception of time.

By its own nature, time is erosion; by grace, it is progress and ascension. This ambivalence only occurs in those spiritual beings whose time is free, thus evading the fatalism which is often associated with the Greek conception of time. St. Augustine refuses both the Greek cyclical conception – that means evading time – and the stance of the esthetic man, who seeks eternity in time; he suggests directing time towards eternity. Such position comes from the understanding of the beginning and the end of time, and also from the conviction that eternity is determined by the temporal option in favour of God, or against Him. Our time has an eternal fruit.

Christian Revelation in itself was revelation of the sense of history, so that history is history of salvation. The temporary dies, but there is something in history that does not grow old: the growth in plenitude of the City of God. For its part, Christian philosophy solved in a very different way the natural psychological perception of time. Certainly, the profane century is the only empirical reality, since both cities are trans-historical. In any case, it can be said that it is formed by the citizens of both cities while they are mixed.

For the Christians, the sense of history consists in explaining the temporary from the eternal, for the temporary is actually made for the eternal. The light of Revelation also illuminated the political order. What we call common good is named temporary peace by St. Augustine. In other words, peace and order in any society are the task of man. Terrestrial goods must be understood as a piece of wood in the sea, used to reach the beach. The relationship between man and this mediums is never profane, but it will be good or bad depending on wheter it is born from the love towards God or the love towards oneself.