Hasten BROTHERS TO EXPECT THAT 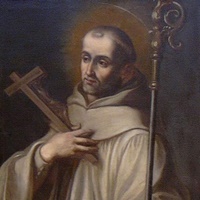 Bernard of Clairvaux (Latin: Bernardus Claraevallensis), O.Cist (1090 – August 20, 1153) was a French abbot and the primary builder of the reforming Cistercian order. After the death of his mother, Bernard sought admission into the Cistercian order.

"Three years later, he was sent to found a new abbey at an isolated clearing in a glen known as the Val d'Absinthe, about 15 km southeast of Bar-sur-Aube. According to tradition, Bernard founded the monastery on 25 June 1115, naming it Claire Vallée, which evolved into Clairvaux. There Bernard would preach an immediate faith, in which the intercessor was the Virgin Mary."

In the year 1128, Bernard assisted at the Council of Troyes, at which he traced the outlines of the Rule of the Knights Templar, who soon became the ideal of Christian nobility. On the death of Pope Honorius II on 13 February 1130, a schism broke out in the Church. Louis VI of France convened a national council of the French bishops at Étampes in 1130, and Bernard was chosen to judge between the rivals for pope. After the council of Étampes,

Bernard went to speak with the King of England, Henry I, also known as Henry Beauclerc, about the king's reservations regarding Pope Innocent II. Beauclerc was sceptical because most of the bishops of England supported Anacletus II; Bernard convinced him to support Innocent. Germany had decided to support Innocent through Norbert of Xanten, who was a friend of Bernard's. However, Innocent insisted on Bernard's company when he met with Lothair III of Germany.

Lothair became Innocent's strongest ally among the nobility. Despite the councils of Étampes, Wurzburg, Clermont, and Rheims all supporting Innocent, there were still large portions of the Christian world supporting Anacletus. At the end of 1131, the kingdoms of France, England, Germany, Castile, and Aragon supported Innocent; however, most of Italy, southern France, and Sicily, with the patriarchs of Constantinople, Antioch, and Jerusalem, supported Anacletus.

Bernard set out to convince these other regions to rally behind Innocent. The first person whom he went to was Gerard of Angoulême. He proceeded to write a letter known as Letter 126, which questioned Gerard's reasons for supporting Anacletus. Bernard would later comment that Gerard was his most formidable opponent during the whole schism. After convincing Gerard, Bernard traveled to visit William X, Duke of Aquitaine. He was the hardest for Bernard to convince. He did not pledge allegiance to Innocent until 1135.

After that, Bernard spent most of his time in Italy convincing the Italians to pledge allegiance to Innocent. He traveled to Sicily in 1137 to convince the king of Sicily to follow Innocent. The whole conflict ended when Anacletus died on 25 January 1138.[2] In 1139, Bernard assisted at the Second Council of the Lateran. Bernard denounced the teachings of Peter Abelard to the pope, who called a council at Sens in 1141 to settle the matter.

Bernard soon saw one of his disciples elected as Pope Eugenius III. Having previously helped end the schism within the church, Bernard was now called upon to combat heresy. In June 1145, Bernard traveled in southern France and his preaching there helped strengthen support against heresy. Following the Christian defeat at the Siege of Edessa, the pope commissioned Bernard to preach the Second Crusade.

The last years of Bernard's life were saddened by the failure of the crusaders, the entire responsibility for which was thrown upon him. Bernard died at age 63, after 40 years spent in the cloister. He was the first Cistercian placed on the calendar of saints, and was canonized by Pope Alexander III on 18 January 1174. In 1830 Pope Pius VIII bestowed upon Bernard the title "Doctor of the Church".