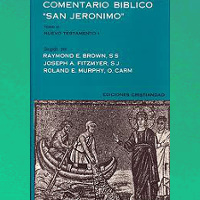 
Raymond Edward Brown (May 22, 1928 - August 8 1998) was an American Catholic priest and an expert in biblical exegesis academic world renowned. It was one of the first Catholic scholars to apply the historical-critical method to Sacred Scripture. He is considered one of the top specialists holders hypothesis called Johannine community, which is speculated may have contributed to the authorship of the Gospel of John. He authored more than thirty books.

Some of his works such as The Gospel According to John in two volumes (first published in English in 1966 and 1970), all remain bound reference John's study, even after more than four decades since its first edition. In 1977 he published The Birth of the Messiah, and in 1994 The death of the Messiah, books on the historical foundations of childhood and death of Jesus of Nazareth, respectively. His rigor permeated its entire production.

In the "New Jerome Biblical Commentary" I reappears renewed two thirds of its length the classic "St. Jerome Biblical Commentary". The years since the first English edition (1968) demanded a new Comment: - the late twentieth century knew breakthroughs in virtually all fields of biblical studies (archaeological discoveries, discoveries of manuscripts, new perspectives in hermeneutics ... ) - bibliographies have been updated greatly, - while the original contributors were mostly clerics in the new edition there are a significant number of lay collaborators, men and women.

The new edition aims to be easier to use thanks to her header pages are references to chapter and verse of the Bible book said. All this update does not prevent the goal and the level of the new edition will remain the same as those of the original work: offering a comment to those who wish to study the scriptures. Also the audience it is intended remains the same: anyone interested in religion and theology and who feel the need for appropriate and comprehensive introduction to the Bible.

Same as the original edition met the needs of the sixties and later, the new edition is designed to meet the criteria of the nineties and early twenty-first century, more stringent criteria since Catholic biblical studies have had time to mature, Catholics and non-Catholics and expect more from them. As in the original edition, the items offered are of two kinds: thematic and comment. The thematic papers present the background information needed before starting verse by verse comment. In the new edition, the thematic section has been expanded, for example with articles about Jesus and the early church.

The three editors have served as presidents of the Catholic Biblical Association and the Society of Biblical Literature. They are well known for their articles published in Catholic and non-Catholic biblical journals.

Raymond E. Brown, S. S. († 1998), he occupied the chair at Auburn Theological Seminary Union (New York). He was president of the Studiorum Novi Testamenti Societas, and author of the comments of the Anchor Bible to the gospel (2 vols.) and epistles of John, in The Birth of the Messiah, The Death of the Messiah (2 vols., forthcoming in Editorial Divine Word), an Introduction to the New Testament and twenty more books on biblical themes. He was a member of the Pontifical Biblical Commission, and the only American Catholic who was part of the Faith and Order Commission of the World Council of Churches. He was elected to the American Academy of Arts and Sciences. Among his many honorary doctorates were the universities of Uppsala, Edinburgh, Glasgow and Leuven.

Joseph A. Fitzmyer, SJ, is professor emeritus of Biblical Studies at the Catholic University of America (Washington DC). He taught at Woodstock College, the University of Chicago and the Weston School of Theology, and also held the Gasson Professor in the Department of Theology at Boston College. He was a member of the Pontifical Biblical Commission. Specialist in New Testament studies, the Dead Sea Scrolls and Aramaic, has published The Gospel according to Luke, Acts of the Apostles, The Genesis Apocryphon on Qumran Cave I, The Aramaic Inscriptions of Sefire and Semitic Background of the New Testament, as well as numerous articles on biblical themes. In 1984 he was awarded by the Royal Academy with Burkitt Medal for Studies Bíblicos.