Contingency of the created Being II 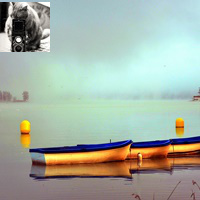 One of the Greek categories that received more modifications was that of the substance. Gilson describes thomistic metaphysics as existential, since Being is substance in Aristotle’s philosophy, but substance becomes created in Aquinas’ thesis.

For a believer, contingency means more than the corruptibility of substances or the finiteness of movement. Until then, substance had existed in its own right, but Christian universe is not like this. This issue marked a radical difference. Aristotle’s Being is identical to its own necessity; it is impossible for it not to exist, but substances are contingent in their own essence in Christian philosophy. When demonstrating the possibility of a creation of the world from eternity, the principle is no longer necessarily understood as beginning of time and movement but as existential causality.

“Principle” is no longer a term that designates only the beginning of time but also the ontological dependence, so that the created world is a world of substances that, being indestructible themselves, are contingent in relation to God. Existence is not what makes things being corruptible or not, but what makes them existing, corruptible or not. Not only the principle of substantiality or the concept of principality were modified, but also the principle of anteriority – which describes how form explains both the rationality and the reality of the real – was subject of such modifications.

Aquinas distinguishes between form and act, and discusses about an act, the act of Being, which is not form; contingency becomes the radical contingency of existence itself. Also the analysis of causality suffered this existential modification, since if in any causality the effect depends on the cause, now we have God as the universal Cause of Being, so that God creates, preserves, animates and leads all things to their own aim. Aquinas poured in pagan philosophy the most radical metaphysical novelty of Christianity: the real difference between Uncreated Being and creature.

The radical difference of the thomist Being is much more than the actuality of an essence or the action-potential diversity inside the substance. The thomist distinction does not refer Being to the mere actuality – nor to the opposition to nothingness - but to God. St. Thomas understands Being from God, the First. The opposition between Being and nothingness is not prior to the difference between Creator and creature; what is most diverse to the created is its Creator; hence, God transcends the creature.